Beware: English is not my maternal language so a few oddities might pop up in the following article.

Recently, Crash Course purported to take a look at myths and to teach you about « mythology », in a series presented by Mike Rugnetta. I quite like some of their other shows so as a learning scholar on the history of religion, and myself producing a few videos on the topic with a few friends I thought that I’d watch them.

The risk is, of course, falling into a simple listing of gods and stories that forgets to put them in context or analyse them. Feminine figures all become « mothers earths », any celestial being is a Sky Father or a Sky God or, god forbid, a Sun God. All nuance is lost to endless paralellism, attempting to erase difference or even influence : similarities become some sort of doorway into a shared human prehistory, although many times you can clearly see pattern of diffusion rather than shared inheritance. Of course who wrote down our sources is hugely important in such matters. For example, in colonial contexts, maybe the indigenous myths resembles christianity because of missionaries’ attempts to retrofit christianity into local myths to help convert the locals? Maybe if all our sources come from after they made contact with the West we should be wary to not extrapolate the state of their religion in the previous centuries from that? Maybe when the christian Church Fathers talked about paganism they weren’t entirely 100% objective? I don’t know, maybe carefully analyzing the material from which we create narratives about ancient religion and myth is important, something we attempted to do with Antoine and Camille in our video on the links between Samhain and Halloween.

As to Crash Course Mythology, as far as the credits let me see, by people with no training in actual religious studies.

That’s not a huge problem, but if they draw from a wide varieties of approaches and schools of analysis they might just provide an introduction to the vast and varied study of myth.

Which I think they didn’t for now.

In fact, I think they lifted pretty much the entirety of the episodes written for now from David Leeming’s The World of Myth : an Anthology (1992). I think there’s a good case for plagiarism, or at least copy-pasting of the utmost laziness and dishonesty and as I’ll attempt to show, it doesn’t require much research to show it. Let’s look at their episode #2 « Creation Myths : Creation from the Void« .

They indeed quote David Leeming at 3’18, but they don’t seem to specify that the entire episode is lifted almost word for word from David Leeming’s corresponding chapter on creation myths. They use as examples of myths :

And in fact pretty much this entire sequence of myths (except for one, maybe two) and all the relevant translations and texts come almost word-for-word from Leeming. Just look.

The account of the Genesis creation myth is given by Leeming pp. 24-25 [Google Books] with the same translation.

As for their « egyptian creation myth » :

They don’t give the source. A google search reveals it is in fact Spell 307 from the Egyptian Coffin Texts. They clearly lifted their translation from Leeming pp. 17-18 [Google Books], although it comes ultimately from Clark, Myth and Symbol in Ancient Egypt, 1959 :

Here is Faulkner’s translation, from The ancient Egyptian coffin texts (2004:226-7) for comparison : 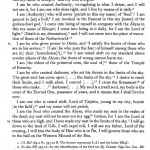 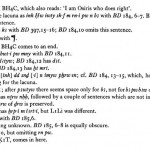 Next comes the creation myth of the Kono people from Guinea. I couldn’t find this one in Leeming but the text seems lifted from In the beginning: creation stories from all around the world, pp. 15–19 [Google Books] by Virginia Hamilton, America’s most honored writer of children’s litterature, according to her website.

I found a differently worded version in another one of Leeming’s anthologies : Creation Myths of the World vol. 1 (2010?) pp. 165-6 [Google Books]

In the beginning there was nothing: neither matter nor light existed. In this world lived only Death, whose name is Sa, and his wife and and their only daughter. Needing a place for his family to live, Sa eventually used his magical powers to create a vast sea of mud. They lived in this filth and instablilty for many years. Finally the god Alatangana came to visit Sa and his familty. Alatangana was appalled at the mess in which they lived, and he condemned Sa for creating such a dirty place that lacked light and life. To set things right, Alatangana first consolidated the mud into the solid earth. However, this lifeless expanse across which he could now walk still depressed him. First he made plants to cover the new earth, and then animals to live on it. Even Sa realized that Alatangana had made the world a much better place, and he took Alatangana in as his guest. Alatangana was wifeless, and eventually he decided he wanted Sa’s daughter for his wife. Sa at first was diplomatic in refusing to let Alatangana marry his daughter, but finally he explicitly refused Alatangana’s request. Alatangana, however, wooed Sa’s daughter, and eventually they eloped to a distant region of the earth.

It’s clearly a different retelling, compared with Hamilton’s version (for which I couldn’t find any source) so it’s possible Leeming told it someplace else in the same manner, or that Hamilton lifed it from somebody else… but for now I’ll ascribe it to Hamilton, while welcoming further information, if anybody happens to have her book at hand and can look up her bibliography. Here are the two pages I could find through Amazon. Beier’s book is cited here so it might be here source, only retold, but might come from somewhere else :

(Of course self-help snake-oil-salesman Joseph Campbell, to quote Andrew Rilstone, is well represented on this list)

They then quote the mayan Popol Vuh. The wording might not come from Leeming, but again here it is, pp. 60-62. I cannot see it in Google Preview but here it is :

There is no real effort to change it, to go to the source, to really retell or summarize with different words, only a lazy copy-and-paste from the same single book, if we except these examples lifted from Hamilton (and even so the second one was already in Leeming). And even if they sometimes go to other versions, the sequence of myths can be found in a fifty pages interval in Leeming – and others will crop up again in later episodes.

And even their edgy-ass attempt to picture the Big Bang as a myth is not original! They say :

Here, we’re going to use the version related by Brian Swimme in his book The Universe is a Green Dragon : »Imagine that furnace out of which everything came forth. This was a fire that filled the Universe– that was the Universe. There was no place in the Universe free from it. Every point of the cosmos was a point of this explosion of light. And all the particles of the Universe churned in extremes of heat and pressure, all that we see about us all that now exists was there at the beginning in that great burning explosion of light. »
Hey, that sounds a lot like some of the most ancient myths doesn’t it? (CCM #2 10’22-11’00)

But you know what ? It especially sounds like you lifted this from Leeming pp. 41-2 [Google Books] again :

Yes, here, they give Leeming’s source (which they don’t do for the previous myths, which would be more important! Who compiled the Kono myth? Hamilton doesn’t say. When was the Popol Vuh written? Was it under heavy christian influence?) but they don’t in any way acknowledge that the wordings, the content, everything comes from this single book. They quote someone quoting somebody else quoting ancient myths, fair enough, but it should be acknowledged.

Nothing in the credits or elsewhere tells us of this massive borrowing from Leeming’s book. And I don’t know, maybe he agreed for it to be used in this way? The same could be asked for Hamilton’s work, even if I think it’s a lesser part of the episode. But beyond the copyright issues here’s the mere problem of intellectual honesty : you’re pretending to give a course in mythology to a wide audience, you’re pretending you’re putting work into it, if you rely almost entirely on the work of another author, you should explicitely and clearly say it, and even then, if you make no effort to adapt or add to the material you’re using, it seems really dishonest to me. They name Leeming exactly once, but unless I missed a footnote, they don’t state how much they rely on his work.

Crash Course did a whole series on intellectual property so they should know that it’s not okay to pull this kind of tricks. You could claim it’s fair use, but it would require a proper citation, brevity and at least attempting to add to what is used – all of which I doubt can be argued here.

The same plagiarism can be shown in the other episodes they have put out so far, and I will do so in the near future.

In conclusion : even if boiling down the study of myth to an insipid mess where you list a few myths without giving any attention to the contexts in which they were written was a worthwile enterprise, they did it wrong, in my opinion, even beyond considerations limited to basic intellectual honesty, and will probably continue to do so in the same manner.

I don’t think anybody here is incompetent or malevolent. I think the writers were not given enough time or space, while not being specialists, Rugnetta is probably unaware, and everybody else only cares about the production mill running smoothly.